Check out whats hot on the forums! 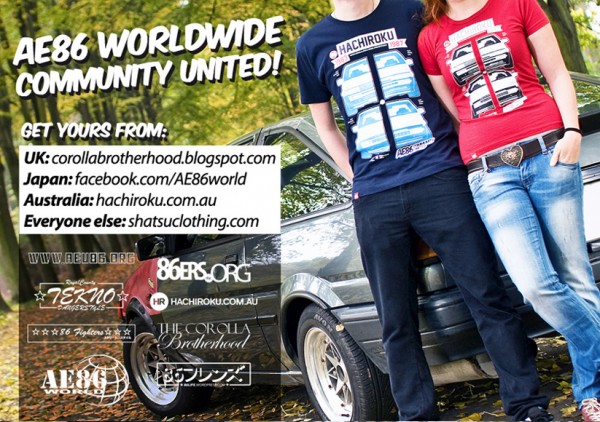 Working together with Shatsu Clothing, the AE86 Community has created this AWESOME T-shirt, representing Clubs throughout the World: 86ers.org, HR – Hachiroku.com.au, The Corolla Brotherhood, AE86irl, AE86 World, and many many more. 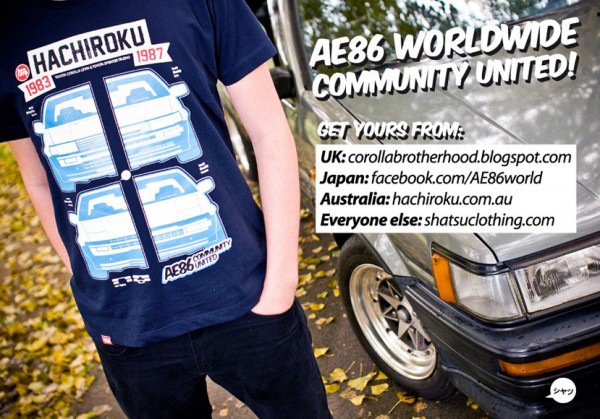 Very *LIMITED* Numbers Available, be fast to Order yours now!

Contact us on: webmaster@hachiroku.com.au with your desired size. Payment via PayPal. 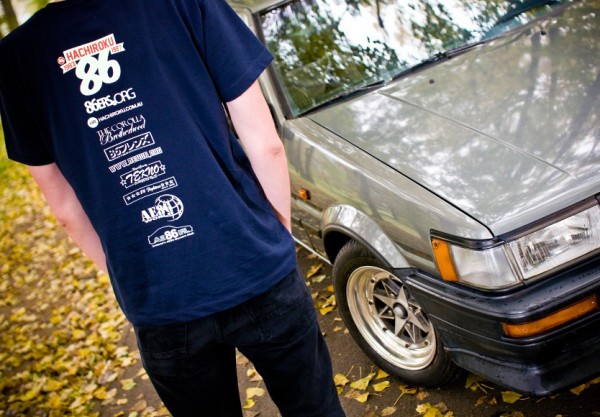 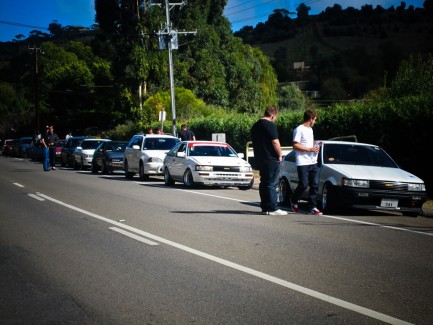 END_OF_DOCUMENT_TOKEN_TO_BE_REPLACED

December 2, 2009 in Community by Garth Ivers 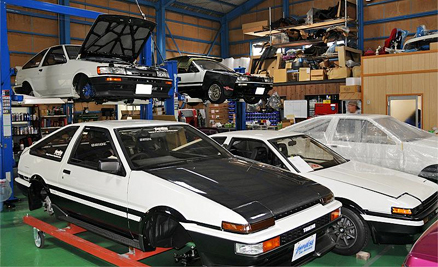 Some people have the life eh? Chris Gray is an Irish lad living in Japan and living the life (sometimes the 86 life too!).  Chris recently got to hitup both the Japanese AE86 tuning powerhouses Carland86 AND Impulse both in the one week!  Talk about Luck of the Irish eh? 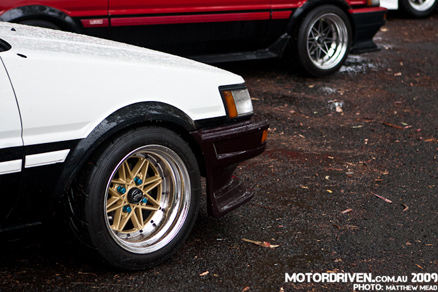 Local AE86 owner and gun lensman Matt Mead certainly gets around the motorsport traps here in Australia, but he took time out last weekend to join us on the 2009 HR AE86 Annual.  Check out his shots over at his blog MotorDriven.

The HR AE86 Annual for 2009 has come and gone… Even though everything was against us and many things tried to stop us!

END_OF_DOCUMENT_TOKEN_TO_BE_REPLACED 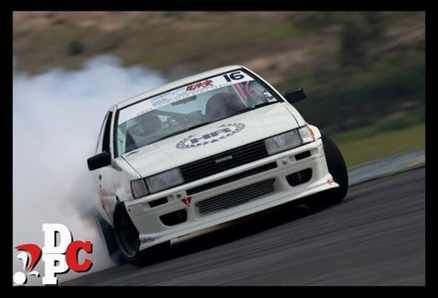 Just like Sebastian Vettel at this weekends Japanese Grand Prix, Mark Rogers stood atop the winners podium having taken out the win at the fourth round of the Specialised Performance Garage Tasmanian Drift Series. Everyone here at HR congratulates you Mark, and are super proud to see that distinctive icon adorn the bonnet of your 3S-powered beast!

Help For A Brother In Need

When there is an AE86 guy in need of support, it seems there is always a camraderie of owners to help out. David Vickers, one of a couple of crazy Canadian hachiroku-heads who visited Alexi in Japan a little while ago, needs the help of the ’86 community to vote for his video entry in the eBay Motors Master competition. The video is fairly hilarious and describes a lot of us pretty accurately so get on over to eBay and check it out! 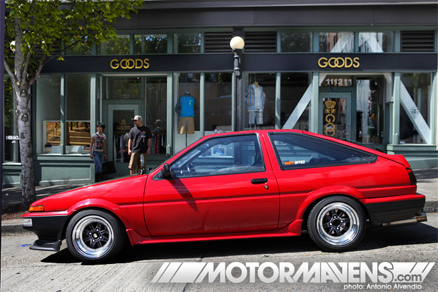 It’s that moment of apprehension when you see someone agape at your freshly washed and shiny ride, staring in envy. You think to youself, ‘What’s this joker up to?’ and run over one million ‘worst case senarios’ in your head. Before you have a chance to get paranoid, you realise they’re just another AE86 owner (or admirer) who will shortly introduce themselves to you and, no doubt, start you into a lengthy chat about how and why our little hachiroku is so damn alluring.  Being a pretty damn harcore ‘hachiroku guy’ himself, Antonio over at MotorMavens has no doubt been in this situation before, and recently found himself in Seattle on the flipside of this exact kind of encounter:

So here I was; standing inside Goods; checking out some sneakers, when low and behold, a bright red AE86 hatchback pulls up and parks right in front of the store. I couldn’t have even timed it more perfectly, it was funny. I obviously stepped outside the store for a closer look at this red kouki hatchback, and immediately two 86ers got out of the car with strange looks on their faces (you know, one of those “why the hell is this weirdo staring at the car” faces).

However, as soon as I introduced myself as a fellow AE86 owner from Los Angeles, it was all good. No problems. For some reason, no matter where you are in the world… when a hachiroku guy meets another hachiroku guy visiting from out of town, they seem to form some sort of instant connection. (Not in a gay way)

This is probably the biggest reason I started HR in the first place. The hachiroku community worldwide just seems to be full of friendly and genuinely cool people. I’m not an expert on the matter, but I’d say it plays a big part of why some people are ‘hachiroku guys’ and never anything else. I know for sure, I’ll be a hachiroku guy for the rest of my days and damn proud of it too!

But I digress, you should check out the rest of the encounter over at MotorMavens now!

All white and all rocking smooth and clean mods, these fairly standard-bodied rides are a refreshing change from the ever-increasing madness we see coming out of Japan and the USA sporting all kinds of wide bodied, flared, blistered, pumped and who-knows-what-else body work. Chester Ng has these great shots of a crew of AE86 lovers from Hong Kong up on his website.  Sometimes less is more and for this selection of hachiroku it couldn’t be more true. I love the ‘Takumi’ and ‘Keiichi’ copycats, they’re almost perfect! 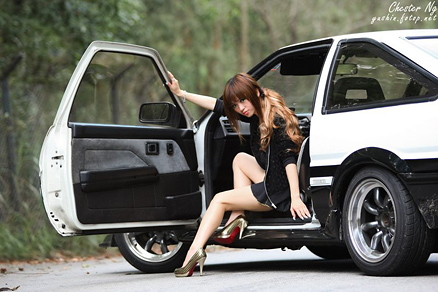 Well considering my hachiroku is still in her rebuild getting body panels massaged and the enginebay pampered, I personally couldn’t celebrate Hachiroku Day by driving. Nonetheless, the AE86 community worldwide has come alive in celebration of our much-loved little twincam warrior.  Sites all across the web have posted up 8/6 Day content so we give you the rundown.

Speedhunters started with a Community Massive Image post which was so huge it spanned three posts! Part 1 Part 2 & Part 3. As well as features from all over the globe on the Driftmoto 86, Tec-Art’s N2 racer, the sweetest panda in Holland and the WKD Imports SR-86!

Antonio over @ MotorMavens kept to his eternal mantra and lived the 86 life to its fullest on Hachiroku Day with some history on its creation as well as two awesome classic Ueo videos and a sweet feature on the Artchis AE86 team cars.  Plus stay tuned for Alexi @ Noriyaros review of the Nikko Trackday celebrations we mentioned today!

A friend commented today on facebook about his old love, an AE86 he used to own. A fitting way to celebrate Hachiroku Day, for past and present drivers!

Dear Hachiroku, With you I found simplicity out of clutter, from discord i found harmony, In the middle of difficulty there always lay opportunity. In character, in manner, in style, in all things, the supreme excellence was your simplicity. With you gone I have come to learn that the simplest things are often the truest.

Hell yeah. Live the 86 Life! Roll on next year!