This is the Swiss Bergrennen Reitnau series. Many of you may recognise the course and event name from many years of past events. Over the years, the 1600cc class has featured Werner Rohr with his infamous 4A-GE 2-door Levin.

Click play and listen to the iconic rasp and scream of the 220 horsepower 1.6L running all the way up to 9000 rpm. Simply glorious Toyota engineering!

If you’re keen to see how Werner’s AE86 was made, check out the gallery from his build process at the Das Racing Team website.

Trueno vs The Corkscrew 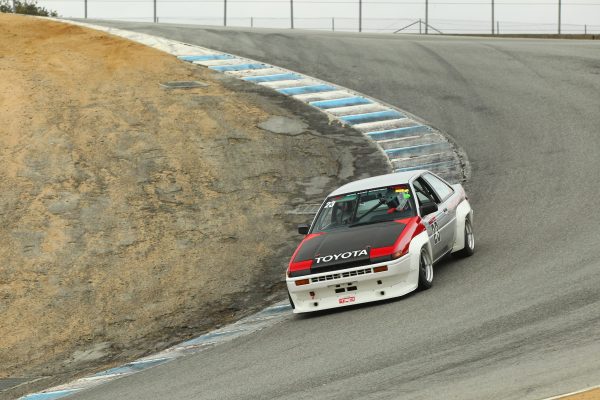 Durk Edwards carving up the Corkscrew at Laguna Seca in his awesome N2 Trueno. 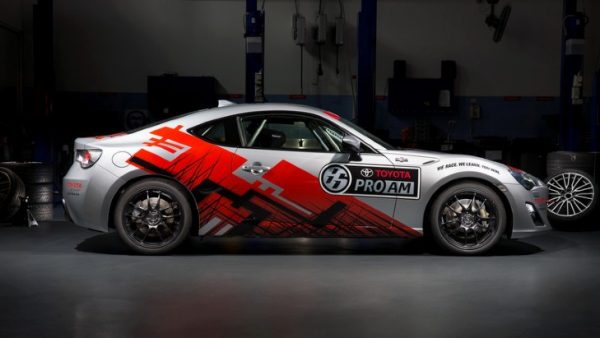 The series, to start next year, will be run as a pro-am with up to five selected professional drivers who will mentor and compete against a larger field of amateur drivers who will qualify to get onto the starting grid.

The Toyota 86 Pro-Am race series, under the official banner of Toyota Racing Australia, will be staged at selected V8 Supercars events and will be sanctioned by the Confederation of Australian Motor Sport.

The 86 race cars will be based on the GT manual with key specifications controlled to ensure their suitability and reliability while keeping costs as low as possible.

“The 86 sports car has brought to life Toyota’s brand promise as a company whose people love cars and are building exciting vehicles for customers,” Cramb said.

“The dynamic abilities and fun-to-drive characteristics of the 86 provide a credible platform for motorsport – and many owners already compete regularly in tarmac rallies, lap dashes and other events,” he said.

“The Toyota 86 Pro-Am series will present genuine, dynamic and entertaining racing to a broad audience, including big crowds at each round and a large audience on free-to-air and pay TV.

“Fundamental to the concept is that it is a grassroots motorsport series that is affordable for anyone who has both the passion and the talent to compete in a national series.”

The 86 has become a cult hero since being launched in mid-2012 with Australians having bought more than 13,000 cars – the third-highest total in the world.

Cramb said Toyota has a proud history in motorsport around the world, using its participation to produce ever-better cars and encourage even more car enthusiasts. Toyota’s 86 one-make series in Australia will be similar to series run in Japan, Germany and New Zealand.

Toyota is the manufacturers’ and drivers’ titleholder in the World Endurance Championship and has competed successfully in the US-based NASCAR, Dakar Rally, Super Formula and Super GT categories in Japan and at iconic races such as the Nürburgring 24-hour endurance race.

“All these motorsport activities involve testing the speed and durability of our vehicles, which helps us enhance the technology, innovation and excitement of our road cars,” Cramb said.

“Toyota is committed to continuing to bring energy and enjoyment to motoring enthusiasts around the world – from the highest motorsports categories through to grass-roots activities… from races to rallies to customer events,” he said.

V8 Supercars CEO James Warburton said the Toyota 86 Pro-Am series was a welcome addition to the sport which offers its world-class racing categories the largest stage in Australasia and a significant global audience.

“This is a fantastic announcement and we congratulate Toyota for making this commitment to motorsport in Australia,” Warburton said.

“It is indeed an honour that Toyota, the long-term market leader in Australia, sees the power in the V8 Supercars Series and for us to join the ranks of motorsport superpowers globally with whom Toyota has an association.

“And what better time to make that announcement than at the Adelaide event, a huge motorsport weekend which showcases a raft of categories from not only Australia but around the world.”

Toyota 86 chief engineer Tetsuya Tada said he was honoured to be named patron of the series, especially because the global success of the Toyota 86 owes so much to Australia.

Tada said he was impressed – and humbled – by the overwhelming passion and enthusiasm for the 86 among Australian owners.

“My dream is that one day we can have a World 86 Challenge with the best drivers from Japan, Europe and other markets – and the champion Toyota 86 driver from Australia,” he said.

Gotta Love the ’80s! This Toyota Ad Is Great!

Taka Aono is a pro driver in Formula DRIFT, the premier professional drifting series in the United States. He competes in a 1986 Toyota Corolla GTS, known among enthusiasts by its chassis code: AE86. He has been drifting competitively since 2003.

The progression of professional drifting in recent years has resulted in vehicles of enormous horsepower and build quality, and a shift in judging criteria that rewards high speeds and close proximity in tandem rounds. The general consensus among drivers and fans alike is the AE86, with its short wheelbase and low horsepower output, is no longer competitive in professional level drifting.

Taka has competed in every round of Formula DRIFT since its inception in 2004, and he has done so in his AE86.

Alexi at Noriyaro hits us with killer video after killer video. It’s great to see that content is coming thick and fast from NY again!

Alexi’s also got a Noriyaro2 channel up over on YouTube, with behind the scenes and longer uncut videos so check that out here! 「https://www.youtube.com/user/noriyaro2」 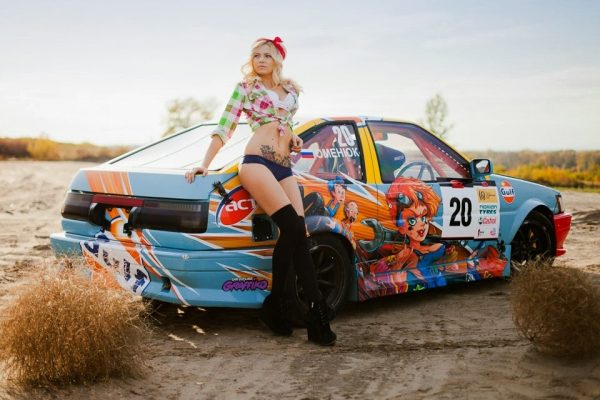 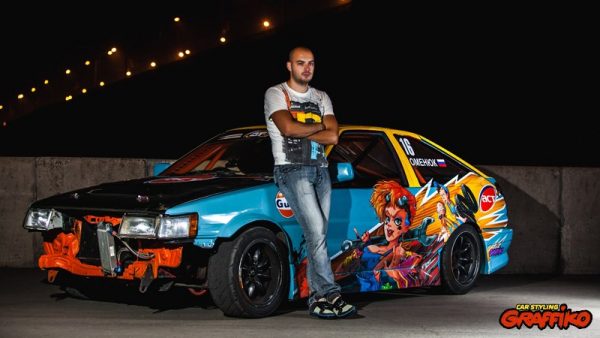 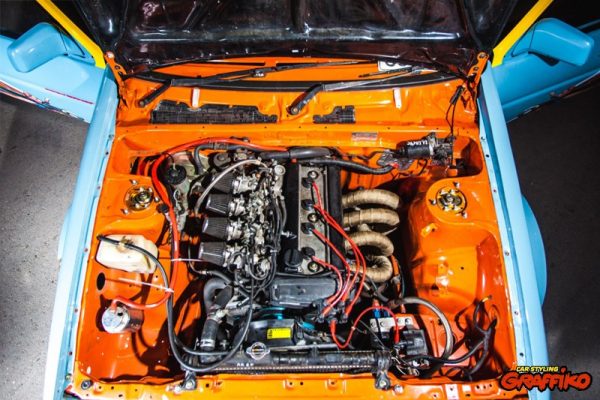 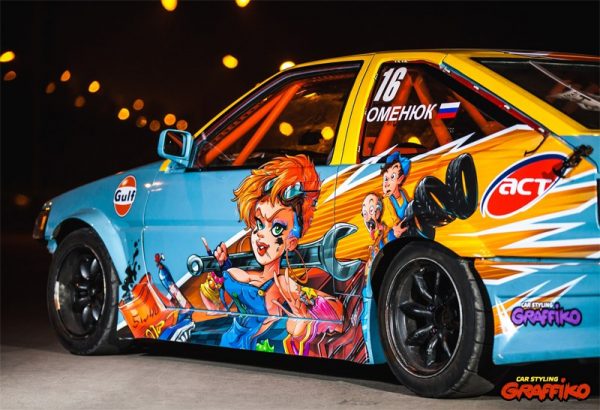 END_OF_DOCUMENT_TOKEN_TO_BE_REPLACED

HR fan and avid MX-5 enthusiast Josh Dobrik just dropped us an email with this tasty morsel of AE86 drifting madness. He writes:

“Thought you guys might enjoy this raw clip I made whilst in Japan. One unforgettable day spent at Meihan Sportsland witnessing these deafening AE86 drivers running amok.”

Before Tada-san flew into Australia for #festivalof86, Toyota Australia asked the Aussie fans to send in some questions for the Chief Designer. Here are some telling answers to those questions! 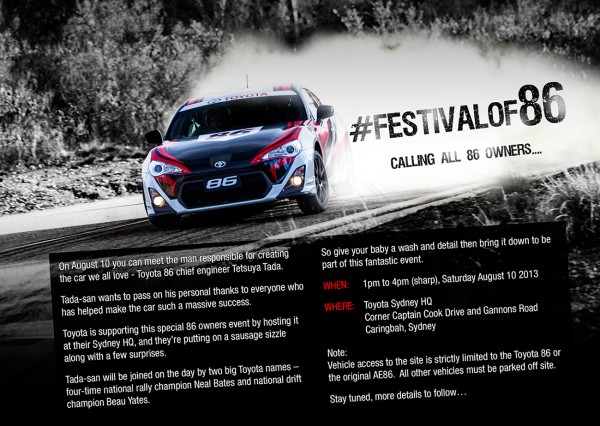 On August 10 you can meet the man responsible for creating the car we all love – Toyota 86 chief engineer Tetsuya Tada.

Tada-san wants to pass on his personal thanks to everyone who has helped make the car such a massive success.

Toyota is supporting this special 86/AE86 owners event by hosting it at their Sydney HQ, and they’re putting on a sausage sizzle along with A FEW SURPRISES!

If you are attending ‪#‎festivalof86‬ with your AE86/86/BRZ, you need to register your car spot at this website: https://festivalof86.eventbrite.com.au and join the event now on the Hachiroku.com.au Facebook Page.

Only 250 spots available and being taken fast!

86’s and AE86’s are the only cars permitted on the premises. Everyone else will have parking outside the grounds.