Bukit Putus road. They abandoned it, the AE86ers discovered it.

The Road To Heaven

…would be made like this.  What a sweet bunch of corners! If you didnt already guess the star of the show, it’s the awesome-sounding Custom Garage Speed N2 Levin. Who says circuit cars can’t drift?

One Shot: Night Of Fire 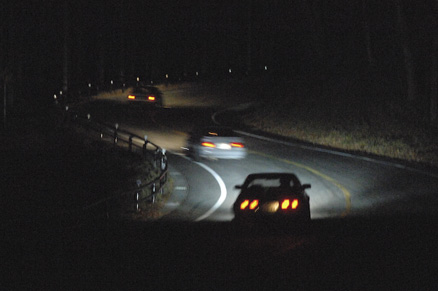 Last Saturday night on a touge road “a couple of hours out of Tokyo”….
Check out the wallpaper in the downloads section.

Nobuteru Taniguchi (or N.O.B aka No One Better) is probably best known outside of Japan for competing in his red HKS S15 Silvia in the D1GP and winning the championship in 2001. He later finished 2nd in 2002, 4th in 2003 and 2nd again in 2004 by that time switching to an SXE10 Altezza. However he’s also piloted some amazing machinery in some hotly contested compeitions from Super Taikyu to 24 Hour NÃ¼rburgring and even JGTC (for team R.E Amemiya no less!)

He apparently began his career racing minibikes (interesting…) amongst a list of achievements though what sticks in my memory the most is; basically he ‘set the bar’ for drift competitors at the inception of the D1GP compeition in Japan. That red HKS S15 was rather menacing. So a few years ago when I came across this video I was shocked to learn that someone who seemed to have always been a Silva driver actually learnt to drift in an AE86.

And heres the oldschool video to prove it (it’s been around for awhile) but it’s worth watching again… just to hear his commentary on what shoes not to wear while drifting (lol). Enjoy.

What are your favourite drift shoes? Hit the comments.

Is this a sequel you ask? Well almost, it appears to be the same mountain road featured in an earlier blog we posted a mere few days ago. Another oldie, is it the same AE86? Perhaps.

The JZA80 Supra stretches its legs early on but the Hachi pilot reels him in (a pretty good effort on the uphill section) before there’s an ubrupt (though by the lines of the Supra driver, almost expected) sad end to this pursuit! Thankfully the speed of this video hasn’t been edited, nice sound quality too!

This is a first in the series of our choices of some of the greatest driving roads the World has to offer. We rekon whether you are a drifter or a circuit racer, everyone enjoys a good drive on the open road!

We may as well start with the best and Stelvio pass in the Italian Alps would have to be up there with the cream of the crop of immersive tarmac. Widely regarded as one of the greatest driving roads both in location and execution, it’s located eastern Italian Alps near the Swiss border and part of the “three languages peak” (where Italian, German and Romansh are all spoken) and it’s steep slope means it gradually winds it way down the mountain with insane back to back hairpins.

END_OF_DOCUMENT_TOKEN_TO_BE_REPLACED

Here’s some rather old footage worth digging up. It comes from a Drift Tengoku VHS and the main reason I’ve posted it? Well do you think the footage has been sped up artificially? It does look rather quick at times, perhaps too quick!

The engine notes however sound on-song and don’t sound like it’s been doctored. The AE86 in front sets a pretty good pace for the driver of the EG6 (or EK9) Civic in hot pursuit. I’ll leave the verdict up to you guys; leave a comment with your thoughts!

UPDATE: The video’s uploader changed the embed restrictions on us, so here’s a link to the video instead. Apologies to those who couldn’t play the embedded vid. :)