Somewhat fitting after yesterday’s post on the 2010 season of Formula D kicking off, today’s post is a homage to the guy who some might say is the hardest working AE86 driver in the USA: Taka Aono.  This video by the AE86-loving DeadPirate crew is a recap of Taka’s season in 2009.  Seriously great editing and an awesome soundtrack too. 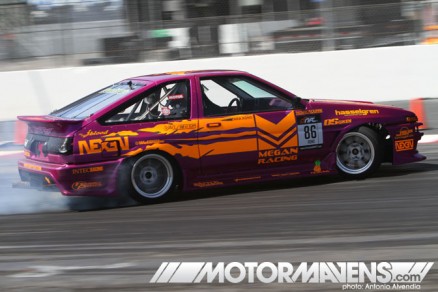 You may remember a few months back we posted up that Hasselgren was building Taka Aono a turbo powered 16v 4A-GE for his Formula D AE86? Well it’s finally finished! Check out the the next two videos for the first runs on the dyno and it in full flight at practice at Formula D Seattle.

First there was high powered NA 4A-GEs, then turbo were thrown in the mix for when you began to feel you needed that little bit more. But when the 4A-G no longer cuts it, people go in search off other manufactures to power the heart and soul of their own little hachi roku. Some decide a dirty Nissan engine would be perfect, but the new craze is the “VTEC yo!” F20/22C powerplant from the Honda S2000. Combining a 800kg ’86 with a 250hp powerplant that revs to 9000rpm and you have a reciepe for something really amazing.

However, this was not the case for John Russakoff, Formula D competitor and owner of JSP, who after competing in a Standard F22C found that it just didn’t cut the mustard. This saw him implement some changes to boost (pun intended) the output up to 350hp by bolting a Garrett GT28RS turbo. However this was no simple “bolt on” procedure. For the details I’ll let the pictures do the talking.

END_OF_DOCUMENT_TOKEN_TO_BE_REPLACED

Last Sunday, D1 driver and ace AE86 pilot Toshiki Yoshioka from Team Droo-P, steered his AE86 with its NA 4A-GEÂ  blacktop 20 valve to Formula D victory – smashing everyone else with a definitive win for the AE86.Â  Only the second time he has competed in a Formula D event, the ‘Toshiking’ reminded everyone else of the true power and meaning of the car that that started it all – the mighty AE86!

His skill was so perfect at times that some of the Formula D drivers who tried matching Yoshioka’s speed through the course reportedly ended up slamming into the wall!

The final battle was against Daijiro Yoshihara, driving Rhys Millen’s former championship car, the infamous Pontiac GTO. After a battle of epic proportions, Yoshioka and his AE86 had made the statement and victory was undoubtedly his. Good job Toshiki – you make us AE86 drivers proud!

Check out the pics after the jump.

END_OF_DOCUMENT_TOKEN_TO_BE_REPLACED

Here’s a blast from the past!. Back in ’04, one of the first in depth track oriented Hachiroku build-ups from the USA was that of the TechnoToyTuning (T3) Trueno on the Club4AG Forums. It consisted of the development of an already running car, then a full ground up re-shell when previous car experienced the wraith of the notorious Irwindale banks at a Formula D drift event.

The car was also driven by Tsuchiya himself at Willow Springs Raceway for the filming of “Best Motoring: American Touge 2″ . The build up was lost when Club4ag was refreshed but has now been reposted on the Al Lagura’s (the driver of this beast) personal website for the world to see once again.

END_OF_DOCUMENT_TOKEN_TO_BE_REPLACED

When You Are Toshiki Yoshioka, It’s This Easy!

For the average Joe, a motor transplant usually turns into a six month rebuild sucking endless wads of cash from your wallet in the process. However, if you are Toshiki Yoshioka, Japanese AE86 drifter extraordinare, you just make one simple phone call and few days later you have brand new top spec 4A-GE sitting in front of you – fresh from Japan no less.

Courtesy of auto-lifestyle blog OG-Made, we bring you some sweet pics of Yoshioka’s new US drift machine (he is currently drifting a Lexus SC430 in D1GP Japan) in the build. He will be using this new iteration of his old blue DRoo-P Trueno to slide in both US D1GP events and also in Formula D for 2008.

Check the jump for more pics!

END_OF_DOCUMENT_TOKEN_TO_BE_REPLACED

Hasselgren Engineering is currently developing a Turbo Formula Alantic 16v for the Falken sponsored AE86 driven by Taka Anono, to compete in the 2008 Formula D Championship. The engine will be good for 10,000rpm and make around 400rwhp. This power will be passed through a OS Giken close ratio FC rx7 box, a mk1 supra rear end and smoking up wide Falken tyres. This is a powertrain that any AE86 owner would die for, it will be truly amazing to see and we cant wait for video footage.

More photos of the insane powerplant after the jump.

END_OF_DOCUMENT_TOKEN_TO_BE_REPLACED

Is This The Inspiration for the AE86’s Successor?