After our mini featurette on Japanese workshop Carland, most of you should be familiar with the Kyoto based company and its AE86 expertise. Now, Carland have just started to organise meets and events for their customers and other Kyoto based ’86 drivers. Their first meet last month in Kyoto was a meet up at the Arashi Mountain Takao Parkway Parking Area for a group photoshoot for the upcoming Toyota Levin & Trueno Magazine Issue 21.

Pics after the jump.

END_OF_DOCUMENT_TOKEN_TO_BE_REPLACED

Under the Watchful Gaze of Mt Fuji, They Gathered in Their 100’s…

We’ve got some great photos today from a short ‘touring meet’ in Hakone, Japan on April 27th. Not much else is known about the meet up yet but judging from the photos it was a huge success! White is ever popular as you can see …

Photos after the jump.

END_OF_DOCUMENT_TOKEN_TO_BE_REPLACED

We’ve done another tough week here at HR blog. All that watching videos and absorbing hachiroku goodness.. ahh wouldn’t it be nice if we could get paid for doing just this?

Sweetness comes in video form of the Motore Levin Coupe from Touge Showdown 2. Just love the sound of this car!

and as a bonus:

Yes, we’ve all seen it, but it never gets old!

Carland might not be the most recognised name in the AE86 racing world, but their cars will no doubt be remembered long after the big names have gone from the circuit. Located in Kyoto, Japan, Carland has been instrumental in the restoration and maintenance of the entire nations AE86’s by way of their insane AE86-exclusive workshop and dedicated mook (a magazine book for those unfamiliar with the Japanese term), “Toyota Levin and Trueno Magazine” published by Tatsumi Publishing.

END_OF_DOCUMENT_TOKEN_TO_BE_REPLACED

UPDATE 2 MAY 2008: We have managed to find the elusive little car and have some better shots of the FUTO after the jump. It handles like a dream and is quite zippy in comparison to the other smaller cars in the game. We found it in the ‘Meadow Hills’ area of ‘Dukes’ for those who are yet to drive it.

It only took a day but an AE86 has been discovered in GTA4! Called a Karin FUTO (tofu reference?) in game, the car is obviously modelled on an AE86, a Levin coupe to be exact, and has the kouki clear fog-light grill and what looks like some 8-spoke RS Watanabe rims.

Even the engine bay got the perks as it sports a quad-throttle equipped 4A-GE and the interior is almost identical to a USDM AE86! Apparently it even has a sticker saying “Inline 20v Twin Cam” on the side! Looks like someone on the team was an AE86 fan! Thanks to you Mr mystery modeller!

Still, there has been no word on how it handles in-game yet or where it commonly turns up. We will let you know as soon as someone can tear themselves away for long enough to tell us!

Some pics after the jump!

END_OF_DOCUMENT_TOKEN_TO_BE_REPLACED

When it opened in 1997, YZ Circuit was originally intened to be a dedicated motorcycle track, but in recent times the majority of traffic rolls into the track on four wheels. An almost even 50/50 split of grip and drift events ensures that there is always some sweet action on the track and due to the dangerous and exciting nature of the circuit, official competitions and events are often held there much to the delight of motorsport fans.

These pics (courtesy of 7TUNE) are from a recent event held by Tetsuya Hibino from Sunrise Garage. It was mostly a drift practice session but the afternoon had a friendly team drift competition where groups of three cars per team would be competing against each other.

END_OF_DOCUMENT_TOKEN_TO_BE_REPLACED

If you want to know more about twincharging a 4A-GE visit this site.

Hit the jump for an extra video showing various stages of the build up.

END_OF_DOCUMENT_TOKEN_TO_BE_REPLACED 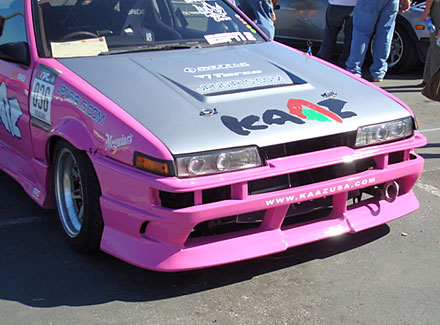 The only saving grace is that its reversible… poor little AE86…

Just a quicky on this long-weekend holiday, here are a few pics in Okinawa from the Team Hinga boys at a little drive day they had yesterday. A little insight into their little island’s AE86 culture. Cheers to Chris from Team Hinga for the pics.

Check them out after the jump.

END_OF_DOCUMENT_TOKEN_TO_BE_REPLACED

Check out the AE86 pics from the gallery after the jump!