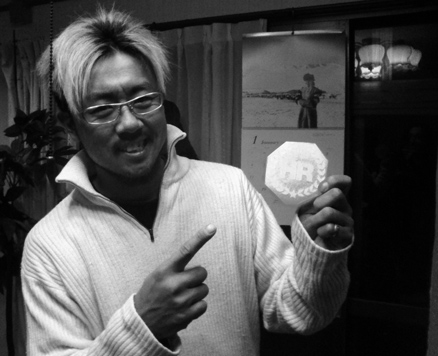 Yep, that’s right! Japan’s master of the Ebisu Jumping Drift, Tetsuya Hibino, is a huge fan of HR.  All thanks to Alexi from noriyaro, HR stickers will soon be popping up on lots of Japan’s most infamous hachirokus! HR Represent!

Motors TV reports on the 2007 Irish Prodrift champion: Eric O’Sullivan.  It’s an interesting insight into the Euro scene from someone immersed so deeply into it.

After seeing Beauman had purchased the Willwood brake kit for his drift AE86 build, I started thinking – Just what kind of bolt-on alternatives are out there? Well it just so happens after some random ‘net browsing I see that the guys over at Tec-Art’s have recently developed their own.

END_OF_DOCUMENT_TOKEN_TO_BE_REPLACED

Hazards Of A Drift Missile

Alexi from noriyaro is up to no good again, this time with his drift missile coverage.

This flat-black Levin used to belong to Satoshi “Wampaku” Nakatani from Garage LFW. That was until the engine blew and Shino from Shino Kouba garage bought it cheap and stuck a standard 4A-GE in it to have some fun with. Unfortunately though, when you’re driving a car you don’t really care about crashing, you sometimes do.

Carnage after the Jump!

END_OF_DOCUMENT_TOKEN_TO_BE_REPLACED

I’m not sure about all of you out there, but when I found the rust in my sprinter shell spiralling out of control, I didn’t think of ways to fix it, I just started looking for mint condition chassis’ for sale to avoid the hassle.

Some of you may be confused as to why I’ve chosen this picture as the thumbnail for this story, but anyone who knows just how difficult this kind of metal work is will certainly be in awe.

Maybe it’s the old Japanese way of struggling constantly to overcome adversity but this is just mental. The amount of damage and rust on this shell would be ‘give up now’ material to anyone else, but somehow through some very bespoke methods and superior workmanship, this little AE86 lives again!

Check out the build gallery here.

…and we are BACK! I hope everyone had a fantastic and safe holiday, 2008 was a great year for HR Blog and we hope to bring you even more in 2009! Stay tuned this week as we have some exclusive content direct from Japan plus possibly the third instalment of our AE86 Tuning Guide! But for now, enjoy this clip from YouTube, I thought it was fitting to our 2009 ‘Warm Up’ preparations!

END_OF_DOCUMENT_TOKEN_TO_BE_REPLACED

In my opinion, this maroon maniac is the hottest Levin ever, it’s just so damn nice! The inspiration for my AE86 build, if only it was a Trueno!

Tetsuya Hibino’s character on D1 videos might be one of a rude, slang-talking tough guy, but in reality he’s anything but hard to talk to. That is, if you can understand his rapidfire “ittara” Nagoya accent and can keep up with his dictionary-like knowlege of the Toyota AE86 and how to drift it.

Has The ‘Economy Crisis’ Slowed Your ’86 Build?

As most of us who live in Australia already know, buying AE86 parts from overseas has now become quite well, insane. Currency rates have almost halved from what they were 4 months ago and as a result a lot of the local parts imports companies have gone belly up.

Having just dropped over 3 large on a bodykit shipped to Sydney, I can say that for me it hasn’t slowed down. It’s a case of ‘I need it now, and the economy isn’t going back to where it was anytime soon’ philosophy and a need to finish a project that was started in motion before the crisis hit.

The alternative is buying locally made parts, but the problem is there just isn’t enough variety of aftermarket products for the AE86 being produced locally to provide alternatives to buying American or Japanese.  I can’t speak for our American or European readers but here in Aus we have no choice but to import.

What are your attitudes towards the situation? Are you prepared to pay for what you need regardless of the price? Or are you waiting until the dollar/euro/pound gets stronger before you commit to buy?

Hit the comments and let us know!