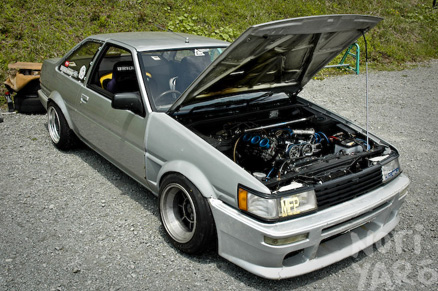 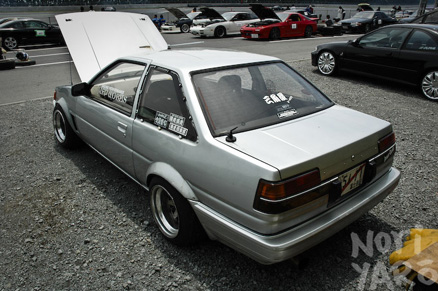 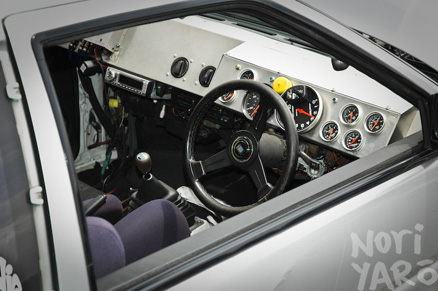 I’ll have to let these pics speak for themselves as Alexi from noriyaro.com was only being a carpark ninja and has no extra info on it. Enjoy!

Here is a behind the scenes video of Eric O’Sulivians 2008 Pro Drift season. Enjoy!

A few months back we posted up some awesome photos of a huge AE86 meet in the land of the shifty leprechaun. It turns out that was the second such meet (or 3rd?) of 2008. Our Irish HR brothers like their meets, and thanks to HR forum member ‘JamesAE86’ we have now got a huge list of photos of the other meet(s) that went down. There are some nice cars on show for sure. My question is where is the love for the stocky clover AE86 rims? Where’s the patriotism! (only joking guys!)

Below is a fine selection of photos, naturally there is the obligatory ‘wet carpark’ photos (lol, no that’s not a euphemism) I think after seeing a bunch of photos of how the Irish lads do their thing it can safely be said that whenever you see a rainbow it doesn’t lead to a pot of shiny precious metal it actually leads to a carpark of several pieces of precious metal doing circle work! If you have any more photos feel free to hit the forums to share the wealth and also check out more of these pics.

END_OF_DOCUMENT_TOKEN_TO_BE_REPLACED

Those crazy Japanese… When it comes to ground-up AE86 restoration they really truly have it down.Â  This guy has five AE86’s of his own, but this one is pure perfection. It’s like an excerpt from Levin & Trueno Magazine with the level of detail they go to.

Make sure you click ALL the links at the top of the page to see the build in its entirety!

Every time I look on yahoo auctions Japan, you usually find all these beaten up cars and you may come across something amazing but not that often. However, you always see some super mint cars from the restoration company Tube. Every car they post up is lightly modified, but also look factory mint with some nice offset wheels.

END_OF_DOCUMENT_TOKEN_TO_BE_REPLACED

Since their very first meet was a success, Carland held a second one last weekend to enjoy the many changing colours of Autumn on the mountain roads!

END_OF_DOCUMENT_TOKEN_TO_BE_REPLACED 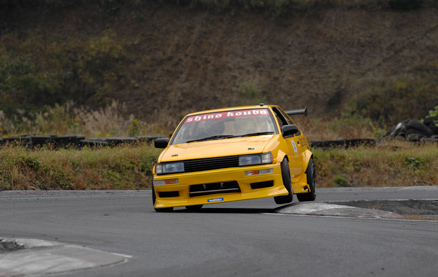 Alexi from noriyaro.com give us the lowdown our latest ‘One Shot’:

The owner’s name is Numajiri, the photo was taken at a Nikko Circuit practice day. He used to work for Shino Kouba workshop which is why he runs the garage name across the windscreen. I think it has something to do with Ken Satoh in regards to the bodywork.

It is a complete grip car. When I rode in it, the semi slicks were almost worn out, but he was able to hammer it for most of the track anyway. AE111 engine I believe… injection with open bellmouths, tubular manifold, ECU on the floor, bolt in rollcage, completely stripped.

We tend to agree. Check out some exclusive wallpapers over on our new Downloads section.

END_OF_DOCUMENT_TOKEN_TO_BE_REPLACED

Care of Auto Otaku (via Kultivate) comes this staunch little Levin with some serious attitude. Some strange body mods but the wheels and colour definitely make up for it. Simplicity in its finest form!

Check it out Here.

It being the last few weeks of summer in Japan, the ’86 enthusiasts in the land of the rising sun make good use of the warmer nights to gather in roadside parking areas and talk up all things hachi roku.Â  Only a few weeks earlier, the same crew attended the HACHiRoCK!! FeSTA 2008, but being the die-hard AE86 fans they are, were itching for another meet up before the frozen months set in, trapping them inside their houses for 3 months of AE86-less confinement.

Check the website for the rest of the photos. It never ceases to amaze me simply how many AE86 enthsiasts there are in Japan, and again how many of them are feverishly active within the Japanese scene.