With some of the worst subbing I’ve ever seen on a video, this clip is an excerpt from the Initial D Live Action Movie’s ‘Bonus Disc’ showing a very lucky yet shit-scared TV presenter getting a ride with Dorikin.Â  You don’t really need the translation to understand what happens. Reminds me of a scene with Takumi and Itsuki in the actual movie…

Check it out here.

If this doesn’t scare you then you have large gooners! Poor 86!! 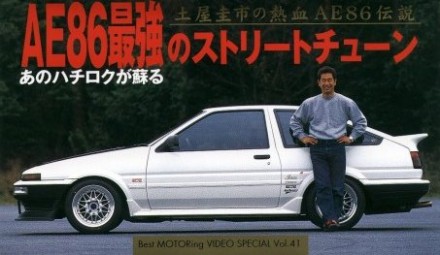 Thinking about doing a ground up rebuild on your humble little 86????

Dont know where to start???

Watch this youtube video to see how Tsuchiya’s personal Trueno was prepped:

As the user has disabled embedding of the link please find the link here:

More drifting videos ’cause we just cant get enough. Shot on location by Aussie journo Alexi Smith, this drift session at Mobara Circuit had almost every car in attendance being an AE86. Super awesome grassroots drifting right here! Just listening to those 4A-G’s sing warms my heart!

Prodrift Ireland is now posting up podcast for the world to see. Ireland happens to have some of the best 86s in the world competeing in this series, so be sure to check out the following link to see all the action from this amazing series.

Video: Have You Ever Wondered?

I’ve always wondered what it would be like to be sitting on the starting grid with 30 odd cars around you, getting ready for the red lights to go out. But imagine what it would be like with 30 Hachi Rokus lined up around you?! The lucky 86 owner in this video has lived my dream!!! (and yes… the Japanese share a different taste in music compared to us westerners…)

This guy seems to be having the best damn time ever. Can you really blame him?

Flat out down Ebisu straight with a clutch-kick at the end is simply pure insanity.

A car that we recently featured on this blog (click to see) has shown some of its potentional at a recent hill climb in the UK. The event was completely new to all the competitors, but no one would of expected the little hachi roku to take out the honors of fastest time of the day. The 86, known as Black Betty, was up against some stiff competition such as ‘Super 7’ Clubman’s, worked WRX’s and many different Evo’s. The highlight of the day was the battle between the 86 and a 450hp pulsar GTir, each taking the fastest time of the day run after run.

However in the last run the pulsar went all out to try and win and ended up into the trees. The driver was ok, but the same can’t be said about the car (see picture after jump). It was a great result for Black Betty and I hope this will lead to even better results in the future!

Pictures can be seen after the jump as well as a video.

END_OF_DOCUMENT_TOKEN_TO_BE_REPLACED

Here you will witness the best AE86 drift team currently still together… The one and only Team Mouse in full flight… man i love the team drift action!! (taken from Drift Tengoku #37)

You get this monster: