If you’re ontop of whats happenning in drifting worldwide, you would be aware of the current trend of putting the Honda S2000’s F20C engine into the AE86. One reason you could summise why the swap is so popular is to try and reduce the inherent lack of power output most professional AE86 drifters suffer from.Â  At least 5 major AE86 drifters from the USA have chosen the Honda route and successfully pulled it off with the European guys more recently jumping onto the bandwagon with conversions of their own.

Now here @ HR Blog we love all things AE86, however some of us are purists whilst others embrace the idea of the engine transplant. We want to know what you think about engine transplants (or any other complete component transplants for that matter) and what your dream AE86 configuration would entail. Original, Hi-tech or a straight out mongrel – get commenting and let us hear your ideas!

Antonio from Speedhunters really can’t resist his deeply-rooted ’86 urges and continues to deliver the goods with another blog of awesome hachiroku’s from Ebisu Summer Drift Festival last weekend.Â  Check out these three tasty morsels of Toyota engineering complete with engine pics and the lot over at Speedhunters blog. Love your work Antonio!

JSP Fabrication have caught the F20C AE86 bug and have apparently made up the first and only bolt in engine conversion mount set for installing the Honda S2000 engine into the ’86. The kit sits the engine and gearbox into the car with no need to cut the firewall or modify the hood to clear – a massive benefit for those without a welder!

The result is an F20C which sits very low in the engine bay lowering the overall centre of gravity of the car and keeping the very agile feel of the original AE86 configuration.Â  An added bonus is the factory 4A-GE and S2000 rubber engine mounts keeping the engine vibration to a bare minimum. They also offer a 4A-GE turbo manifold and various other model bits and pieces too.

Some days you stumble onto the most useful things and today was no different.Â  In the midst of scouring the web for various parts for Project HR, I came across a company called NAPREC. Short for Nagoya Precision, this small but busy workshop in Hachiouji has turned out various engine parts for the veritable 4A-GE since its establishment in 1997.

Whilst lacking the bling of other major brands like TODA or HKS, the NAPREC gear is no fuss, offering cheaper products whilst retaining top quality production. Especially interesting is their custom cast aluminium sump pan, it’s design and finish is just so alluring, even though it’s only a sump pan!

Check the rest out, it’s certainly worth it!

When it comes to building awesome AE86’s for both the street and the track, there a few shops more skilled than Tec-Arts which is located just outside of Tokyo in Saitama Prefecture.

Besides building numerous top level street cars, Tec-Arts AE86 racing experience also includes their famous N2 race car which has achieved great success at the N2 races held at Tsukuba Circuit. Tec-Arts also has an active D1GP project which has been in competition for a few years now. T

he driver of the Tec-Arts D1 Trueno is Kensaku Komoro and is currently competing in the D1GP. It helps set the standard for competition AE86 drift cars around the world and shows that the 25-year old chassis has plenty of life of left in it.

Check out the entire writeup @ SPEEDHUNTERS.

One Shot: Shake of Worker 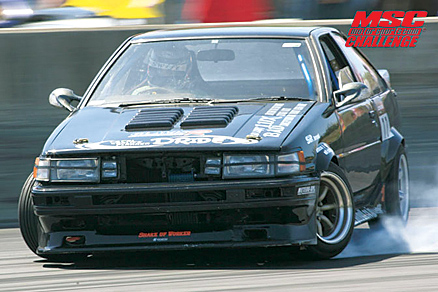 MSC is a grassroots drift series in Japan which features some of the hottest privateer driftcars around. This tasty morsel is from a drift team called ‘Shake of Worker’… Is this not the coolest team name you have ever heard? Classic!

First in class, first in 2WD and 15th overall. It doesn’t matter if they are from Australia or New Zealand, these rally ’86 nuts are on form and showing the rally fraternity of evos and wrx’s that the little hachiroku has still got the balls to rumble with the best. The pilot of this particular blue Levin is Kiwi Lyndon Galbraith with his brother Darren giving the directions. Just listening to that 4A scream makes me grin like an idiot. Great work lads, you make us all proud! Check out some great in-car footage of the many stages of the event here.

Here at the HR blog we love the AE86, and maybe we love the 4A-GE even more, but the guys over on the forums have had a truly excellent idea: Start a picture thread with only the best engine bays ever found in an AE86. It contains not only the best examples of the mighty 4A but other quirky engine transplants too!

Check out the whole thread and add your own favorites too, we can’t get enough of it!