UPDATED Check out the new updated blog (with lots of pictures) here -> https://www.hachiroku.com.au/2012/11/86-essentials-identifying-ae86-tail-lights/

Based on the Japanese market, the chart is as follows: 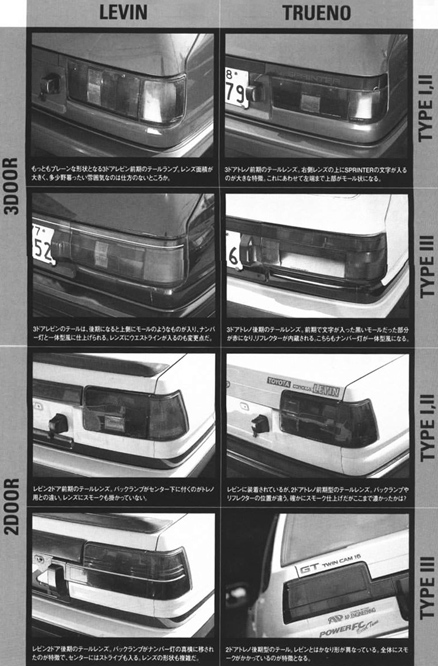 Being in black and white the differences come hard to spot so we will fill in the gaps.

For the hatchback/3-door cars, the ‘Fullface’ is the Levin type 1 and 2 (Zenki). It’s name come from the top-to-bottom design of the coloured lenses on the unit. It is not only common to the JDM Levin but also to the North American AE86’s too. Even though the North American cars were in fact Trueno’s.

‘Sprinters’, also known as the Zenki Trueno tail light are also found in a strange configuration. The Australian AE86 Levin (Badged locally as a Toyota Sprinter) used these tail lights even though they did not match the JDM equivalent version. This is no doubt due to the unique choice in naming conventions from Toyota Australia.

The Kouki or type 3 tail lights came in two versions: ‘Redlines’ and ‘Whitelines’. This one is pretty straightforward with the Trueno Redlines being identified by the large red glass line that runs across the entirety of the top of tail light unit. The Whitelines have a similar layout using a large black top line but with a white pinstripe running through a recess in it. Also instead of the reverse light being nested next to the registration plates like on the Redlines, the Whiteline uses the reverse lense to bisect the brake light segment, splitting it into 2 separate sections.

The 2-door/coupe tail light units use a similar style to their hatchback counterparts, the exception being the ‘Sprinters’, and as a result are quite easy to spot.

4 Responses to How Well Do You Know Your Rear Ends?