Thursday night, I was at home doing nothing special and a call came through from DK admin and HR blogger Mr Beauman Jones. “Hey what are you doing Saturday?” Nothin’.

“I’m going to check out this this guys sprinter with an SR20 in it. Its one of the first with an SR engine in it, wanna come?”. Cool I’m down for that!

So after a bit of stuffing around and going the right direction we end up at Bob’s house. Bob is a mature aged man, or as he puts it “An old bastard”, who has had his AE86 for the last nine years.

Bob bought the car as a clean, neat and original stocker ADM Sprinter with just 150,000km’s on the clock and appearence wise not a lot has changed.

Now this is where the story gets interesting.. Bobs son, Jeff, has been heavily involved with Datsuns and Nissans for a good 15 years. He has had two cover cars in the old Fast Fours and more recently in ZOOM with his two-d00r 1600. Jeff has been playing around with some of Nissan’s finest engines in that time and fitted a number of SR20 and CA18 engines to Datsuns. 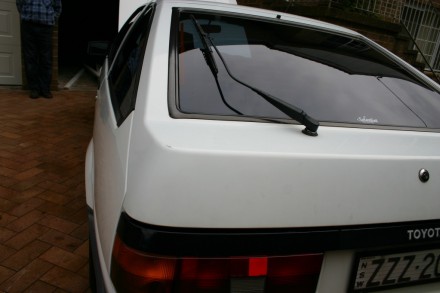 So it was quite unusual at the time to put one of Nissan’s finest into an AE86. Taking their time not to ruin an already excellent body, Bob and Jeff pulled the old wheezy 4A-C motor out and set to work on fitting the SR20 into the AE86 engine bay.

So? Big deal you say? Theres lots of SR20 86’s getting about nowadays. But this was way back in the year 2000! So begun one of the first SR20 engine conversions to an AE86! 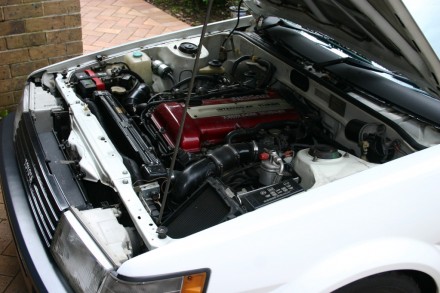 Bob says by spacing the frame down and making his own boxed section for the lower sub-frame made the engine location a breeze and didnt have to worry about bonnet clearence. Having a machine shop and access to many heavy tools such as lathes available to him certainly made it easier.

After the front rad support was cut Bob fashioned up himself some thick plates to sit on the underside of the rad-support to join everything back together. It is an extremely neat job and unless you knew would never notice it. 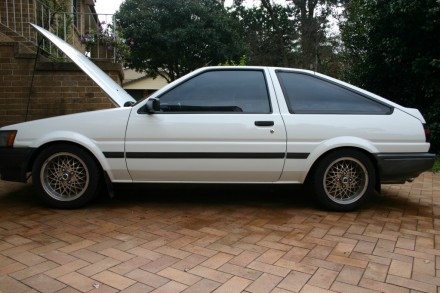 The motor itself is fairly standard, except for a mystery spec turbo with a slightly larger housings on it. The engine uses a factory ECU, and has a custom made front mount intercooler from a volvo truck. At the time Bob and Jeff did not have access to any of the large number of cheap intercoolers now readily available, so had to make their own out of what they could find.

The car also use a standard SR20 gear box and because of the what Bob had done previously by spacing the sub-frame and making his own supports he didnt have to massage the gearbox tunnel and the stick came up about 20-40mm further back than the factory location. Since then Bob has made his own gear stick so the shifter sits almost in the exact factory location as its much easier for himself who is not the tallest man in the world.

Out the back is a modifed Mitsubishi Scorpion diff with a very long ratio. Bob’s been told many a time that the ratio is too long and would never work, but after 9 years its never missed a beat and is perfect for Bob’s needs.

With the scorpion rear end it was difficult to get the handling right with a panhard rod. So bob ditched that and made himself a excellant Watts Linkage for the rear diff. Being a retired mechanical engineering TAFE teacher and having aforementioned workshop available certainly made things much easier.

The car also has upgraded swaybars front and rear. With the lower spaced engine and custom sub-frame it also means that the front roll centre is quite low and does not require the use of roll centre adjusters.

The car is lowered but not too low and has a set of 15×7 Performance mesh wheels on the car for rolling duties. This is all Bob really needs, he’s not a hoon and he just wants something that is comfortable and handles well. 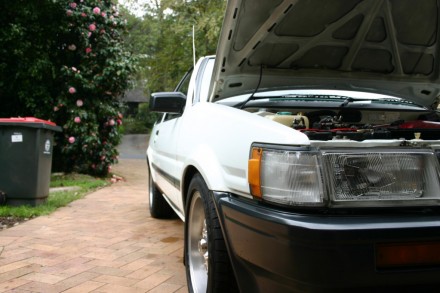 So how does it go? I’ll let the man tell you himself..

“So I was up there on the main road one day, and this young w*nker in one of those Mercedes SLR… SLK… SL convertible coupe things acting like a fool and weaving and ducking in and out of traffic” Bob says moving his hands about like swimming fish.

“Anyway, by chance the at the traffic lights we both end up next to each other and I’m thinking to myself  ‘this guys an idiot, I’ll show you..'” He says with a grin.

“Now look, I’m over 6o and don’t normally do this, but this guy was asking for it the way he was driving. So I decided I wont blow him off I’ll just keep up with him to give it a run and put the wind up him” Bobs says with us hanging on his every word.

“So the lights go green, old mate in the Merc takes off and I roll off still in first just keeping up with him. I shifted into second and it starts making boost the rear tyres are chirping a bit and I think I better get on with this, so I plant it and go into third gear..” He goes on “Once I do this, I fly by the young guy and he gives me this dirty, greasy, scrunched up face look because I was faster than him..”

“Then he notices Ive got the box trailer on the back!!” 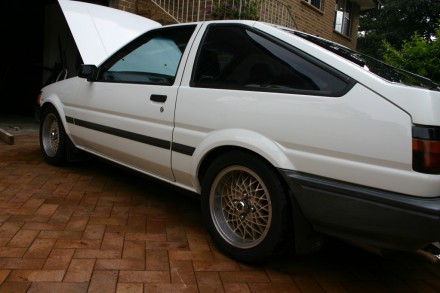 That pretty much sums up Bob. He is an easy going laughable bloke, and certainly very very cluey and a good knack for mechanical things. This AE86 has been his pride and joy for the last nine years and he has enjoyed every minute of it.

Bob is a retired mechanical engineering TAFE teacher, and has been around cars most of his life. Almost all the work done to Bob’s and Jeff’s cars have been completed by themselves at home in their modest garage. No fancy tools or workshops, no fan-dangled new techniques, just plain old simple know how and ingenuity.

But Bob doesn’t just have one car, he also has a ’36 Ford 5 window coupe which he is going to fit a flat-head V8. Not only this but the V8 will boast his own custom injection manifold and will be using EFI – all created by himself!

Also squirrelled away in his garage was two Datsun 1200 sedans. One with a CA18DET motor set up with about 280hp (200kW) at the back wheels, but also a complete nanna spec 1200 sedan with 22000 original miles on the clock, log booked for every service, and original reciept of purchase!

Both Beau and myself enjoyed the experience immensely and would like to thank Bob for the chat and his hospitality. Certainly not every one would allow two strangers into his home garage to check out all the toys he’s been working on over the years, but thanks again Bob!

7 Responses to A Hidden Gem