Over the course of this multi-part guide we are going to explore the ways in which you can modify your AE86. We will cover for the most part what does and doesn’t work without quoting chapter and verse from technical manuals, keeping it as a loose guide on what has worked for us personally and what hasn’t…

Covering all modification types like N/A tuning, forced induction, engine swaps, suspension, drive train and body modification, at each section we will explore the options available for the street cars, circuit cars, and drifters.

Starting with the basics and probably the most common modification for almost any car is a pod style air intake filter. They are cheap, can offer very mild increase in power but mostly its a cosmetic modification. They do allow more airflow and can make a decent induction noise but generally is not a huge power gain.

This is probably the first place to start with your AE86 – If it’s a 4A-GE converted Aussie Sprinter then most likely it will already have one, or if its a JDM stocker fresh off the boat, it’s intake filter has probably never been changed in its life. (see picture below!) 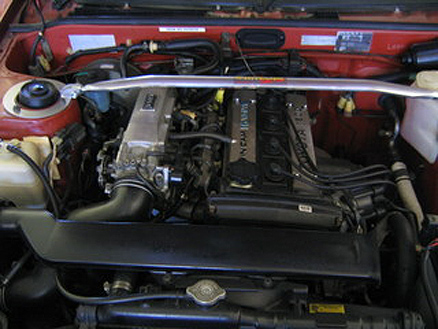 Another basic mod is fitting an aftermarket exhaust system. The basic exhaust system on a JDM AE86 is fairly decent for what it is, and if you purchased a nice clean unmodified AE86 from Japan, a rear muffler for a more sporty note would be sufficient.

However if your chasing power or better response a decent set of headers or extractors with a 2″-2.5″ exhaust system – mandrel bent and sporting a hi flow cat converter – with a hi flow rear muffler will not only provide you with more responsive engine but real smooth exhaust note as well.

Lastly a lightweight flywheel. Now this is a bit of an unconventional choice for a ‘basic’ mod and while this part is a bit more involved, a decent flywheel of about 3.7-5kg will make a big difference to the response of the engine, giving it the ability rev free and harder. 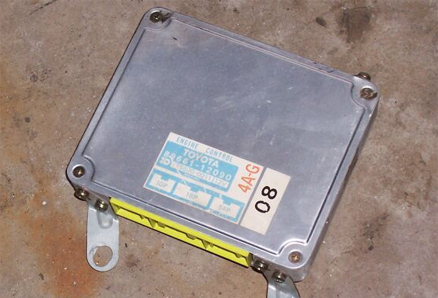 Yes, that little silver box that controls the show, the Toyota OEM ECU. The standard equipment 4A-GE ECU is actually a decent bit of gear for its age, showing that once upon a time Toyota actually knew how make a decent performance car.

Obviously the basics mentioned before can be all used without interfering with the limits of a standard ECU. If the engine is still using factory internals and fitted with standard ancillaries all should be well – but its what you can and can’t do with a standard ECU that make things interesting.

Starting at the top, you can run a thinner head gasket such as a 0.8mm TRD metal head gasket along with a bit of port and polish work to the head. The gasket increases compression slightly, and the head work increases air flow – the standard ECU can compensate for this by adding more fuel as it is receiving a signal telling it that is has more air. At this stage there is not much power to be had with the standard ECU but it does provide a low end urge and mid range punch, especially combined with the basics earlier.

Continuing on with the head, you can also run a set of aftermarket camshafts up to about a 264° degree duration. Again, the standard ECU can compensate for this and combined with headwork and ‘the basics’ will provided a nice smooth power delivery right up to the redline.

Moving on to the bottom end, it is possible to run increased capacity on a standard ECU as long as you keep the internals fairly minimal eg: no crazy high compression pistons, but I will come back to this later.

With the standard ECU it is possible to run mild hi-comp pistons but they will not be used to their fullest when lumped with a standard ECU. Modifications like this would benefit greatly from a programmable ECU such as Adaptronic, E & E Freedom or if you’re loaded a Motec.

Using a small port bottom end with a big port head will provide a slight increase in compression and again has been use many times with a standard ECU. More on this will be covered in the next part. 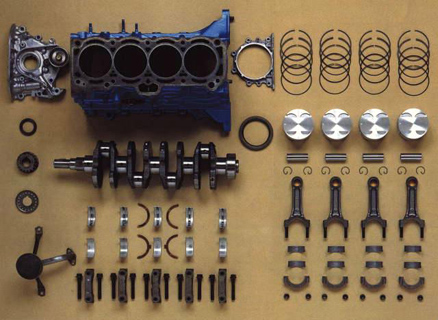 STROKE IS THE WORD

With the standard ECU you can stroke a 4A-GE in a number of ways. Possibly the easiest way is via a 7AFE bottom end from a later model AE102-AE112 corolla’s (yes the bog standard, boring ones nanna drives at 40km/h… everywhere.). The 4AGE head, be it 16v or 20v, will fit onto the 7A bottom and still run the factory 4AGE ECU with a minimum of fuss.

The best part about this method is that it is a hefty torque increase. There is a down side though… the ‘rev happy’ nature of the 4A-GE is somewhat lost and you’re all out of steam at about 6500rpm. The main reason behind this is the spindly rod the 7AFE comes with, and long stroke nature of the engine.

The stroker engines can be given stronger rods and pins to allow it to rev to a higher safe-rpm limit but we will cover this in part two of our feature.

Another option is fitting 83mm oversize pistons, such as AE86 tuner RS YASU does with their engines. Fitting the 83mm pistons gives a capacity increase of about 1660-1690cc or as commonly reffered – 1.7 litres. This mild capacity increase is still usable with the standard ECU for a much torquier and rev happy engine. Having driven forum member Virgilio’s RS YASU ’86, compared to my high comp engine it is seamless in it power delivery with it making a nice smooth power curve all way to redline.

You do need to be careful when boring the 4A-GE block as fitting anything more than an 83mm piston will cause the block to crack and be rendered unusable. The water jackets and internal water routes will now run close to the cylinder walls, and if bored too far, will split and destroy the internals of your engine.

Any of these mods will provide you a very good street driven engine, that can work in all types traffic, daily driven, and be a weekend warrior on winding road or at the track. If your chasing more power or wish to run bigger cams or quads throttle induction on a 16v 4A-GE then part two of this feature is for you!