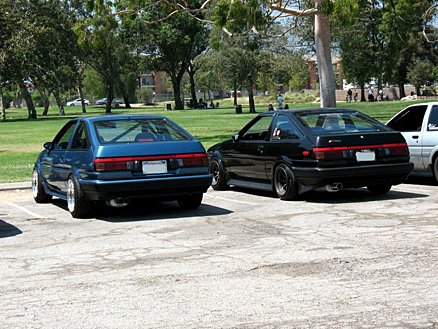 It really is all about offset. Love  it.

What’s this? It’s two new wallpapers up in the Downloads section courtesy of Alexi at noriyaro, that’s what! 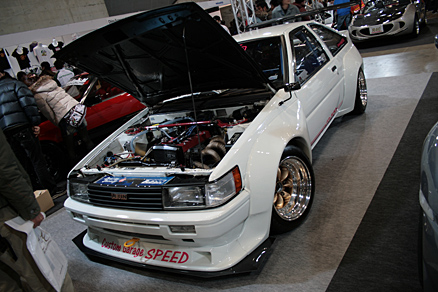 One of the many cars at Tokyo Auto Salon 2009, but one of the very few AE86’s, the Custom Garage SPEED N2 Levin certainly looked the piece amongst the millions of yen worth of vehicles on display.

Sitting pretty in its mint bodywork and wearing some of the widest and most dished wheels i’ve ever seen this N2 monster will no doubt be a centrepiece of the 2009 N2 race this August @ Okayama. We can’t wait!

Hit the jump for a few extra pics!

END_OF_DOCUMENT_TOKEN_TO_BE_REPLACED 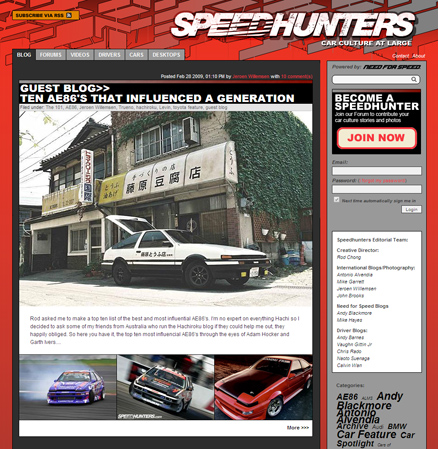 HR Blog has been featured on Speedhunters as a part of their ‘Toyota Month’ in February.

Rod asked me to make a top ten list of the best and most influential AE86’s. I’m no expert on everything Hachi so I decided to ask some of my friends from Australia who run the Hachiroku blog if they could help me out, they happily obliged. So here you have it, the top ten most influential AE86’s through the eyes of Adam Hocker and Garth Ivers.

Have a read and let us all know what you think in their comments! Much love to Jeroen (aka Kultivate) for this opportunity!

It’s Still Rough Out There 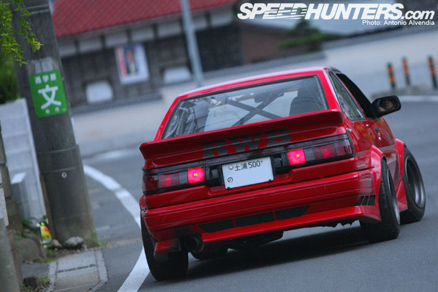 Even though we’ve seen it before, we can always look again! America’s AE86 man Antonio Alvendia is at it again, this time expressing his fanboy lust for the Rough World drift Trueno. Who can blame him? Rough World style is just so f*cking cool! This time he gets intimate with the finer details of the tough circuit beast.

As a drift team, Rough World is like a band of renegade samurai charging through the mountains with “I don’t give a F” attitudes, attacking the local touge roads late at night, stirring fear in the hearts of other drifters that might cross the Rough path; doing battle door to door, with no quarter asked and none given.

So get over there now and check it out.