End Of The Road For Another ’86 Driver

When Garth asked me what I was writing about this week I was somewhat stumped. With my head being currently focused on only one thing at the moment – finishing my drift project – it was proving difficult to give him an answer.

Then I was chatting to a fellow sideways pilot Brad and discovered that he was moving on and selling his AE86 to pursue another route in life. At that point I thought of two things 1. SHIT Brad you are crazy! 2. SHIT! I should do a article on his car before it changes hands!

Brad first bought his sprinter as an abandoned project car: It had no engine or gear box and looked like just another average stock white ADM sprinter with all the bits pulled out – nothing crazy.. yet! But Brad had caught the drifting bug and was embarking on the long road of the religion of the “sideways manji”.

So he set up a plan: Build a simple, powerful yet reliable drift and track car that wouldn’t blow its budget out of the water. Sounds easy right?….

Brad choose a well known but maybe not the most common engine and box conversion for his project: Nissan’s CA18DET. Still trying to keep it simple, he didn’t go overboard on the engine which some people tend to do when swapping engines. A GARRET T28 ball bearing turbo and a Microtech LT8 ECU were adapted to control it all. 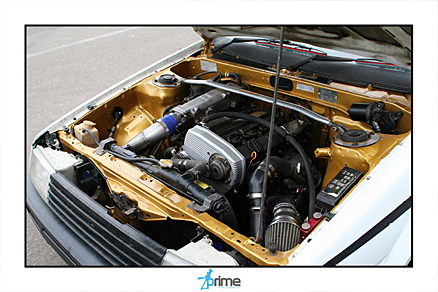 Happy with the engine making 148rwkW on 13PSI, Brad then embarked on the other aspects of the car. Focusing on suspension, yet again mating Nissan to Toyota, he went with the S13 front suspension conversion, giving him mountains of lock, bigger brakes and wider track.

After that he slapped a cage in, some decent wheels and a couple of bucket seats and just hit the track at every opportunity he could. Brad and his little egg Levin started to build a reputation on the circuit in NSW. He and the car both seemed to begin to bond together becoming a great unit. Watching Brad pilot his Levin was something to be seen; especially when he’d be right on the door step of some big-budget power-house drift cars shaking their nerves up! 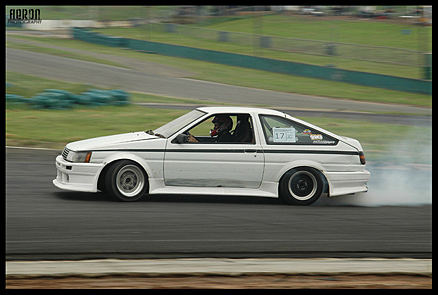 Brad then spent the most of 2007 driving this ’86 into the ground. He was doing it well; destroying diff centres, body panels and eventually an engine. Brad decided it was time to ditch the pig look and took her apart to rebuild her to a glory fit for his new favourite pastime.

The cars last drift day as a lil egg was in August 2007. Brad brought it home and stripped it down. He started with seam welding the inside of the car and preparing the car for paint. All the work was completed by himself so it could be done when and how he wanted it.

So after some blood, sweet and many hours Brad had finished the transformation of the once white piggy into the gold wearing chicken on roids! Sporting some Work Equips 03’s in 15×8.5 -3 for the front and 15×9 -3 for the rear, it seemed to be the icing on the cake and truly complimented the Vertex body kit and the super low stance giving Brad exactly what he wanted (at the time)… 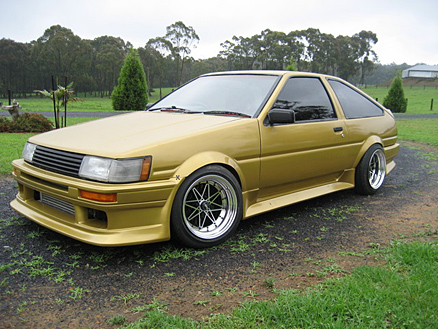 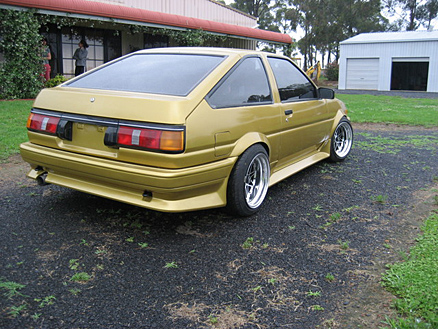 Once the transformation was done and the car was looking a million bucks Brad went drifting! He made quite a splash when he debuted his new car, placing 4th in the 2007 Toyo NSW Drift Australia Series plus taking home the encouragement award.

After these small successes, some of the suspension was updated with the Techno Toy Tuning 4 link and panhard rod kit. Also being installed at the time was a Bride bucket seat to keep him locked in position in true JDM style. Brad also installed some rose jointed castor rods and modified the OEM brackets to mate with his retrofitted S13 components. 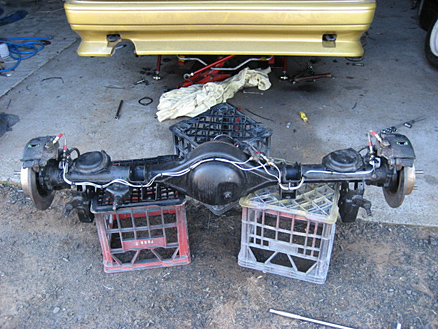 Now in between a lot of driving and modifying, Brad installed an F-series rear diff to try and better handle the abuse and power he was turning through the original diff. Unfortunetly he’d been going through centres faster than a Fat man at a pie eating contest, so to overcome this problem, Brad installed extra oil baffles in the diff which seemed to solve the ‘exploding centre’ problem. Next were the custom rear disk brakes. Using bits from a R31 Skyline and two extra calipers from a VS Commodore for the hydraulic handbrake, the car now locked the way he wanted. 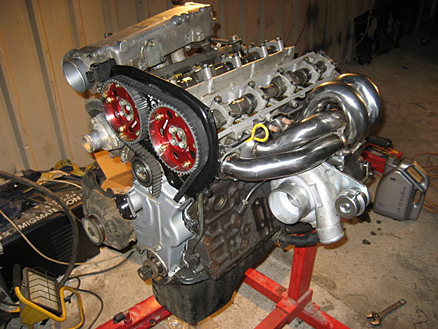 The car now set up for a good punishment, Brad figurd it was time to rebuild the CA18. Parts to go in were; Tomei 256° / 8.5mm lift Camshafts and Tomei Cam Gears to match, some 550cc injectors, a stainless exhaust manifold and dump pipe, an RB20 box to meet the strength of the diff and finally an Extreme Clutch to help with those massive kicks! 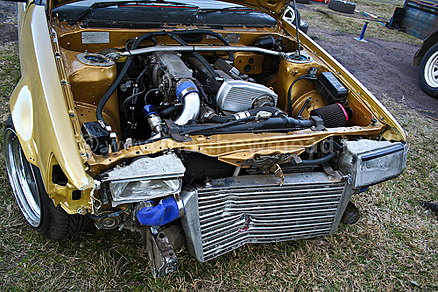 After having a show down with a stationary object, Brad had to either repair the metal or go another route, he chose some DMAX FRP guards. At this point the front suspension was changed out. Now some might say ‘downgraded’ others would say ‘improved’ but either way Brad reverted back to the original design of the AE86’s suspension. The setup consisting of a AE86 strut, S13 Tokico shock, 8kg springs, power steering arms, 40mm RCAs, Tune Agent castor rods and some Peugeot 4-pot Brakes to pull this Chikky up! 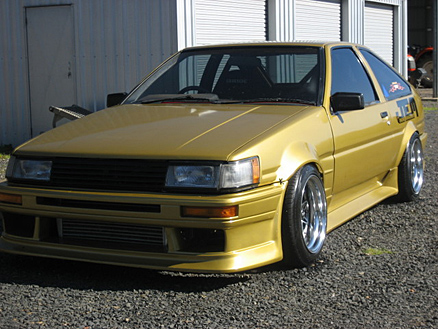 Being a guy who is never satisfied, again he switched styles; this time back to the minimal look with flared metal guards and kouki Levin front and rear bars. Losing the sideskirts and dropping it further on its arse helped it look even more badass! 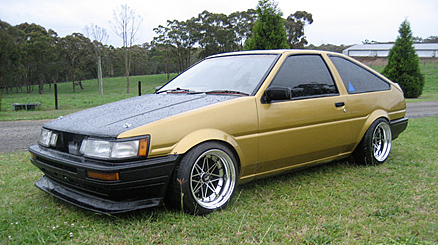 This is basically where it sits now, Brad has been drifting the balls off this thing for a long time and doing it well I think every action shot I’ve seen of him in this car is at full lock with smoke pouring out the back! If this doesn’t jack you up there is something wrong with you or you are dead, one of the other…. We at HR wish Brad all the best in the future and hope that his chosen path may lead him back to the beloved lil Hachi Roku one day!The End Of The Road For Another ’86 Driver

4 Responses to End Of The Road For Another ’86 Driver