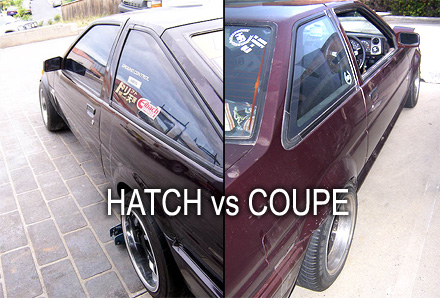 A question that has plagued AE86 enthusiasts since the dawn of time. “Should I get the hatch or should I get the coupe?” Do they have different merits? Do they handle and drive differently or is it all just aesthetics and whilst on the topic of aesthetics… which one actually looks better?Well It’s high time I sat down and attacked this rather difficult question.I’ll do my best to answer it!

In case your questioning my merits to; the cars in the photo above are both mine. Though it almost seems rather trivial to argue with myself over what in actuality is just a choice of what type of boot you like I’ll take it a few steps further. Both these cars are/were at the complete opposite spectrum. What do I mean? Read on!

Before we kick this off I’d like to make it clear that I refer to the non-hatch AE86’s as COUPEs. It’s got 2 doors and a boot, what is it? A coupe! Though whether you pronounce it “KOOP” or decide to be more worldly and hold firm with our baguette eating beret wearing french cousins and say “KOOP-AY” That’s fine. I’m not too sure about other terms such as “notch-back” and “2-door” though each to their own.

The basics are what most people know already. Both versions are built on exactly the same undercarriage chassis the obvious and only difference being the ‘top rear’ of the car. This includes everything from the D and C pillars. The hatch variety having a pillar before the rear side windows and then longer more slanted versions after the glass which also constitutes the rear hatch. Coupes having the rear side glass panes begin immediately next to the door! with different shape windows (shorter) and then onto obvious D and C pillars leading to a different rear glass and boot! Everything below the line of the side glass panes and excluding the rear tail lights and boot/rear seams is the same. Excluding the interior! 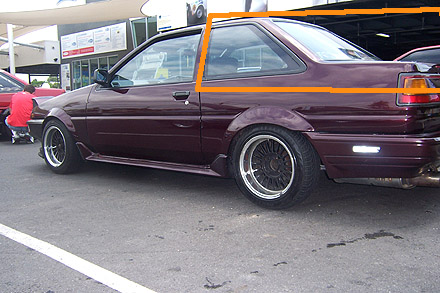 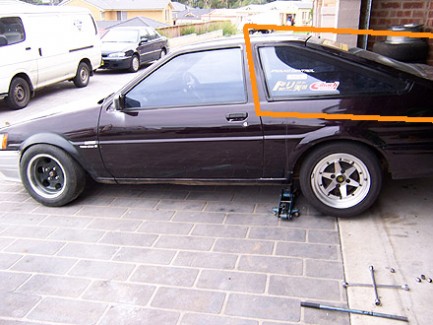 Coupes have a rear parcel shelf behind the rear seats as well as backing mounts which vary to the hatch versions in a few ways. ADM hatches feature fold down seats which clip into side bolted mounts. The seat belts are also mounted inside the panelling of the rear hatch area. Side interior plastic panelling (for the boot) is non interchangeable (the tail bit over lights is however).

Rear seats are not completely interchangeable, that is some versions are but not all. The lower piece of the seats do fit and there is no difference in hatch to coupe. The upper versions of the seats however do not mount.

For example ADM folding seats mount to the chassis with mounts on their upper sides and a center hinge bolt just above the lower seat piece whilst the coupe variety merely slots in to clip areas on the seat backing.  So whilst they are the same size and shape they just dont have the correct mounts or necessary area on the actual seat to mod fit the mounts! Rear seat belts are mounted on the rear parcel shelf and non interchangeable. Rear lights are not interchangeable.

I’ve heard people comment over the years that coupes are actually better for drift because they have stiffer rear ends. This is probably true, the way the D and C pillars after the windows mould into the rear boot lining/seam as well as the top bit of the boot (at the base of the rear glass) going from one side of the car to the other. It’s all a definite advantage. However hatches do have the beginning of D/C pillars BEFORE the rear side glass and after the doors. Sure coupes have this bit under the glass also bit it’s not as wide as the hatch variety. I’d say they just might handle a hit to the roof (right on the drivers head) a tad better than coupes.

Either way both my coupe and hatch cars ran Cusco rear strut tower bars (the drill in variety) and the difference between the cars is not noticeable. A difference in spring rate/height and shock type would play more of a difference on car setup. Let’s remember the undercarriages are identical after all!

It’s hard to discern any sort of difference in driving these cars, this is after tracking one extensively and pushing the other near its limit on a few occasions. That said they have been setup very similarly, especially the rear ends. The only real comment I could make is my hatch felt softer transitioning but I can surely put this down to my adjustable shocks being on a softer setting at the time. The hatch also would step out easier but again I’d put this down to different tyres and a brand new LSD. Not much can be said unfortunately.

A few reasons I went for the coupe were; It’s slightly less of a cop magnet. “But officer its not a boy racer hatch, I’ve grown up, I have a boot!… it’s halfway to having 4 doors and a family” That and I thought I’d be rid of exhaust fumes for good (for all those who don’t run cats, it helps but not 100%) It is definitely quieter though. You don’t hear as much from the rear end. So a coupe looks to be the winner here but it isn’t! The major downsize is SPACE. You have no idea how small a car an AE86 is until you own a coupe.

Driving a hatch with the rear seats/parcel removed is virtually like owning a station wagon. You could fit anything in there, including AE86 hatches and bonnets! and rear differentials! and endless amounts of track rims+tyres. When you own a coupe this all goes away. You can’t fit anything in that boot. If you take the rear seats out you still have the same length capacity (sort of) but you can’t fit big things through that boot hole. A hatch would defiantly the car of choice for the downtown Brooklyn mafia. I’d say its body carrying ratio is at least 3:1.

Owning an N/A car also definitely beats owning the turbo variety here. The only situation I want my turbo Levin back is for track drift. N/A is not only more practical, its a tad more exciting on the touge.

AESTHETICS, EACH TO THEIR OWN

This is kind of like arguing over if a mates girlfriend is hot or not. It’s kind of pointless. Though I admit I still haven’t decided which looks better, both cars have their moments and get the general public ooogling just as evenly. One day I love my boot… the next I’m a slave to that hatch! Ugh. Now what about front ends? Trueno vs Levin. I’ve heard people say that coupes look much better as Levins… because Levins look tougher. Though you could pretty much apply this theory to hatches also. If you follow the lines of the front panels you’lll find the less angle of the levin panels (side on) do give it that ‘beefier’ look. But I think this gets blown out of the water when you pop those trueno lights! (especially side-on)

Call that a cop out but it’s the verdict I’ll stick with. Levins look better than Truenos with their lights down and this applys to either coupes or hatches! And deciding on coupes vs hatches is like getting into a fight with a boxer about oranges vs mandarins, you see my point. 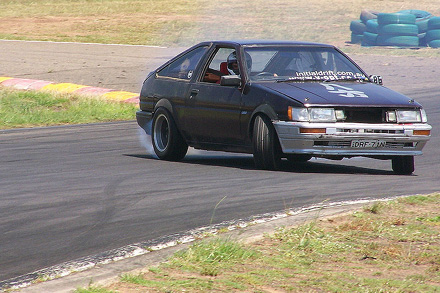 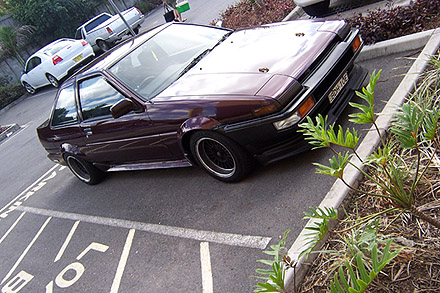 So as you can see both cars have their own merits. It’s impossible to really weigh things up and say I’m going to get X because of Z. For every worthy point theres an equal and opposite counter point. It’s almost like playing a game of chess. What should your next AE86 be? You’ve just gotta go with your gut feeling I’d say. Remember, whatever choice you make it will be an AE86! So you can’t go wrong.

10 Responses to HATCH vs COUPE! The complete AE86 spectrum.