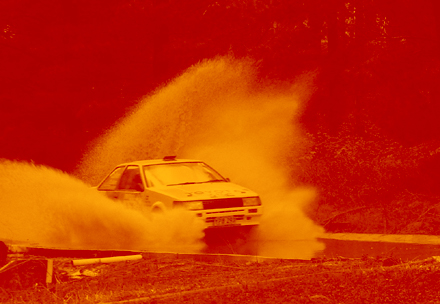 Remember Ben Cullen with his Group A Rally TTA Levin coupe Replica we showed you last month? Well at the Rally of Canberra on May 10-11, his trusty little Sprinter took out the F16 Class win! I’ll leave you with his comments after the jump to full summise the weekends trials and tribulations that got them to the top of the podium.

Iâ€™m stuffed but it was worth it

With a few ECU tuning dramas on the Monday before the event left me with Tuesday to work my butt of to get the car ready with all bolts checked and fluids changed with just enough time.

But the car was in good shape with a few more HP across the rev range and feeling very strong.

Reece was fun in the Auto Hyundai Getz with nothing out of the ordinary, except for coming across the incident between the Ute and the Forrester just after it happened.

Now the fun stuff, our rally turned to poo on the way to SS1 when we realized there was no power getting to the intercom, Mathew did a good job yelling the important calls, but if anyone has seen the in car footage from the sprinter itâ€™s not the quietest car even yelling . On SS2 I misjudged a fast left hander and spun and got bogged on the soft stuff and stalled it, we eventually got out but lost 6 min.

We fixed the intercom on the first service which was a relief to Mathews voice, I was very soft on the first run through Jacks House and Old depot itâ€™s been a while since I was up to those speeds but was fun nether the less.
After the regroup the second drama to disrupt our weekend occurred with the 2 locating pins in the shifting mechanism sheering off causing the shifter to just float around which made for an interesting time mid stage as I tried to figure out what had broke and how to change gears !!! I somehow still managed to beat my previous run through Old Depot by 10 sec ???

Near the end of Fearnside we came across the stricken WRX on its side and on fire and all but blocking the road , so we jumped out and helped put the fire out and get the car off the road.

In service we took the whole assembly apart to see what had broken, but there was no easy fix, without a new housing or lots of fabrication work, it was also impossible to use 1st , 5th and reverse gears.

Day 2 was very Frustrating with every 3rd shift the selector selecting the wrong gear or no gear, It was terribly frustrating on The Gorge and Millpost by the end of the day, as every mis-shift was costing buckets of time, I will take a spare shifter assembly to every rally from now on, or just be less forceful on my shifts, I tried to put on a good show at the spectator points, hopefully someone has some video of the air on the jumps,

Thanks to my Parents for coming down and organizing servicing as well as a big thanks to the Toymods Service Team of Steve, Ben, Justin, Grant and Marcus

Now to fix that shifter…
Ben